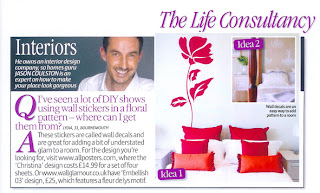 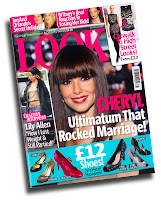 So not only have we been blogged we've also been featured in an edition of Look magazine. We actually missed the mag but they kindly sent us a copy. And I have to say ours looks mint! Its a shame for the other company, but then they chose that image so its their own fault. I think being in Look has actually driven a lot of traffic, in fact we doubled the previous months hits in one week!

We have had a busy time of it for the last two weeks, but it is now leveling off to a regular amount of sales per day. I am hoping that as time goes on we'll be able to convert more hits into orders. We have planned to improve the site, even though lots of people have given us some really nice comments about it, but we can't rest on our laurels so we have a few planned improvements...nothing to drastic, as the old saying goes "if it aint' broke dont try fix it".

This is just a quick note for anyone interested. There has been a few little behind the scenes changes that hopefully will make the Wall Glamour experience a lot better. DeliveryFirstly we have changed our delivery options from Recorded 1st Class and Special Delivery to one national price of £7...

Butterflies are one of our most popular products and Andy from Birmingham has sent is in a pic for our photo competition.He said "We're really happy with them and are changing how we are going to finish the room because of them." So dont forget to get your entries in...

A new feature we started last month was a photo competetion where a customer could send us a photo of their wall stickers, and the best photo or the most imaginative use of our stickers would win a £50 voucher to spend online in our shop! Well, this month we...

is added to your shopping cart.